Since this video was made, this couple has been sent to jail for two years.

Don’t think for a minute that the same scenario wouldn’t occur if Bernie Danders, A. O. Cortez, or Barack Obama were given one-party state power over citizens.

Socialism is, by very definition, giving enhanced power to the state. It is nothing less than communism that hasn’t yet revealed its ultimate intentions. Anyone who thinks they’re an avant guard rebel for supporting such a system really is clueless about human nature and history.

The most succinct and insightful overview of the “collusion” / Mueller probe scam.

(Even a quick look at the first half of this interview affords some sober insight and understanding of what happened).

# posted by Promethean Antagonist @ 9:37 AM 0 comments

Fidel Castro successfully eliminated a vibrant middle class economy in Cuba and replaced it with a decrepit rotting corpse of “equally distributed” destitution.

But, Hey! Look at the great place he was able to acquire for himself!

Socialism...always, first and foremost, for socialists.

Orwell’s, “Animal Farm” should be required reading for young people eveywhere to protect future generations from this perennial nonsense.

In Solidarity with the Citizens of Paris, France, and the World

...who mourn the destruction of something beautiful.

If the terrible event did not occur by deliberate action, concerns and suspicions are still well-founded in a country where over 800 churches have been desecrated by the evil hand of an uncivilized, intolerant and oppressive religious / political ideology.

At a time when we are constantly told to honor other cultures, maybe It’s time we start honoring our own.

Notre Dame is still with us.

# posted by Promethean Antagonist @ 9:30 AM 0 comments

It’s hard to convey just how pathetic the left’s propaganda machine has become — beyond cringeworthy. 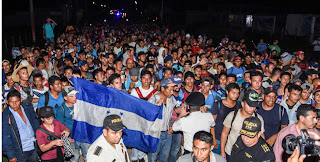 Facilitators of the Horde

It’s a foreboding thing to consider that many great civilizations prior to their final collapse are inundated with waves of less advanced people’s. In the obvious Roman example, barbarian hordes overrunning the empire coincided with a thousand years of anti-civilization. Of course, now noting such things exposes one to all manner of chastisement and censorship — even attention by the authorities. After all, who is to say that a powerful dynamic society with laws, art, and science is superior to hoards of ill-educated vagabonds? Who says that a cathedral is superior to a mud hut or weather satellite superior to a rain dance? Shame on one for even suggesting such a thing (sarcasm intended).

The same people who today mock church-goers and the blue-collar “Walmart shopper” stereotype have no problem elevating the image of Central-American gang members to the same levels as the West’s most accomplished minds. Why teach Shakespeare when there are so many first rate Latin American Marxist complainers? The facilitators of the horde want little more than...absolute control over humanity. If they can use the rabble to accomplish their ends, what better way to claim their place on the throne of autocracy. The bread and circuses can be paid for by the dying wealth of a once vibrant caste of creators. A population concerned with subsistence won’t bother leadership with trite concerns like freedom and they certainly won’t be striving to “make [their country] great again.”

Should we be surprised that, in the current advent of chaos, waves of the destitute and uneducated flood America and Europe? There are no doubt educated and refined people among those who seek assimilation into successful cultures but those people typically assimilate through legal channels and are motivated to share the successes of civilization. They appreciate what the west offers and they “give back” even when it’s not necessarily their intention. The illegal mobs that so often storm the gates now, do so for little other reason than to peck at the rotting remnants of what had been human advancement.

In the end it is all no more than entropy at work on a social scale. A fraction of civilization resists and seeks to maintain the old order. A mob intrudes, and the most decisive factor of all, the scheming traitors (can they be accurately called anything but?) do their best to serve up a former hero’s remains to a flock of parasites.

Chaos, destruction, and destitution become the order of the day. A new dark age is cheered on by those who want nothing more than to see greatness vanquished and the swamps and caves repopulated by the defeated. If they can drag the entire human race down into misery they will celebrate.

Ironically — again, the Roman example — after an extended period of cultural squalor, descendants of barbarians decide that the old order had some good things going for it, like the rule of law, art, poetry, questions regarding the human condition. Eventually, a renaissance emerges and human achievements so aggressively laid to waste are now deemed worthy of resurrection. A new era of human greatness occurs, to once again fall under assault by humanities’s cruder characters.

Yeats foretold our time, “The best lack all conviction and the worst are full of passionate intensity.”